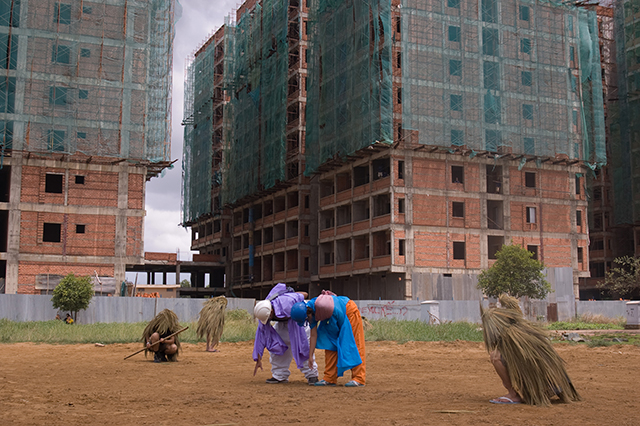 Richard STREITMATTER-TRAN
The Gleaners and the Ghillies - Construction

He was an arts correspondent for the Madrid-based magazine Art.Es and and Ho Chi Minh City editor for Contemporary and has been published in several catalogs and periodicals. In 2005 he received the Martell Contemporary Asian Art Research Grant from the Asia Art Archive in Hong Kong for his year-long research project, Mediating the Mekong. He was Teaching Assistant at Harvard University (2000-2004), conducted media arts research at the MIT Media Lab (2000) and a visiting lecturer at the Ho Chi Minh Fine Arts University in 2003. He is an advisor to the Para/Site Curatorial Programme in Hong Kong. He is currently a lecturer at RMIT International University Vietnam.

Upon relocating to Vietnam in 2003, he helped form ProjectOne, a Ho Chi Minh City-based performance art group now defunct. Two years later he became a founding member of Mogas Station, a group of international creators (artists and architects) based in Ho Chi Minh City, working to promote and present contemporary art in Vietnam. Its members came together in 2005 to create Ạart, the very first artist initiated bilingual contemporary arts magazine in Vietnam launched at the Singapore Biennale 2006.

As co-curator he developed The Mekong exhibition with Russell Storer of the Queensland Art Gallery for the 6th Asia Pacific Triennale (APT6) in 2009.

In 2010, he established DIA/PROJECTS, an independent studio and contemporary art space in Ho Chi Minh City.